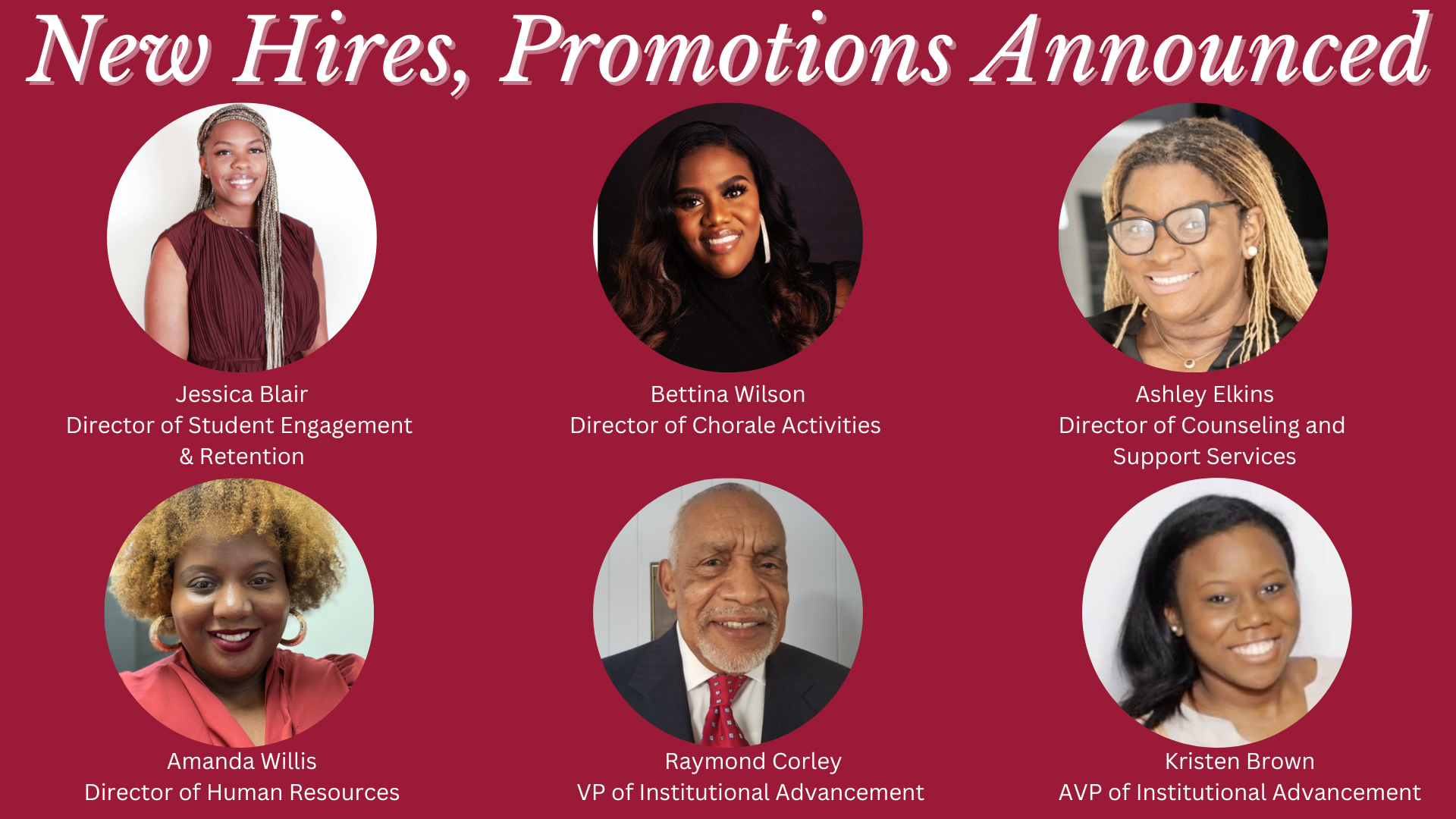 Jessica Blair has been hired as the Director of Student Engagement and Retention. Previously serving as the Head Women’s Basketball Coach and Academic Success Coach at Clinton, Blair will be responsible for the administration, implementation, and promotion of student development programs designed to foster student engagement and leadership and support student retention.

An alumna of Clinton College, Blair graduated in 2012 with an associate degree in liberal arts and continued her success at Morris College where she received her bachelor’s degree in criminal justice. Blair later went on to receive her master’s degree in higher education, from Purdue University Global.

New to Clinton College, Bettina Wilson joins the College as Director of Chorale Activities. With a background in performing and singing, Wilson has traveled with countless gospel groups and choirs across the Carolinas. She has been featured in musicals such as Aladdin, Grease, Rent, Prince of Egypt, and Black nativity as a singer, dancer, and actor.

Ashley Elkins joins the Clinton family as the Director of Counseling and Support Services. Elkins has a bachelor's degree in child and family studies from Columbia College in Columbia, SC, and a master's in rehabilitation counseling from South Carolina State University in Orangeburg, SC. She is a National Certified Counselor and Licensed Professional Counselor in the state of South Carolina.

She has varied experience with several populations including substance use, corrections, and vocational rehabilitation. However, Ashley is most proud and interested in her work surrounding Internal Family Systems and the prevalence and treatment, or lack of treatment, of mood disorders, psychotic disorders, and trauma-related disorders in BIPOC communities. She is a huge fan of inner child work, group therapy, and self-care.

Amanda Willis is the new Director of Human Resources. Joining Clinton from Winthrop University, Willis is focused on creating and promoting a collaborative work environment with the faculty and staff while promoting the human resources office.

Amanda received her bachelor's in mass communications with a concentration in broadcasting from North Carolina Central University. After graduating from NCCU, Amanda went on to obtain her master's degree in organizational change and leadership from Columbia College in Columbia, SC. Before her time at Winthrop, she also held roles at SC PEBA, Richland One School District, and Lexington Medical.

Raymond Corley is currently serving as the Interim Vice President of Institutional Advancement. No stranger to Clinton, Corley previously served as Vice President for Institutional Advancement at Clinton in 2017. A graduate of Benedict College, Corley received his bachelor’s degree in history followed by a certificate in management from the University of Alabama. Corley went on to pursue graduate studies at USC-Columbia in student personnel services.

Having served as a Lobbyist for over 30 years, Corley also served as Special Assistant for Legislation for Governor Dick Riley, Legislation Liaison for the Department of Social Services, and Deputy Director of OEO.

Kristen Brown has been promoted to the role of Associate Vice President of Institutional Advancement. Prior to her promotion, Brown served as Director of Marketing and Communications at Clinton College. Before rejoining the Clinton family, Kristen served as Director of Alumni Relations and Development at Shaw University. She brings a broad range of experience in communications, relationship management, and fundraising to her new role.

In addition to a bachelor's degree in mass communications with a concentration in journalism from Shaw University, Kristen holds a master's degree in public relations from Full Sail University.