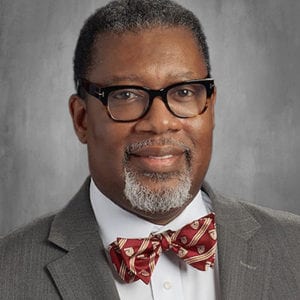 The Reverend Dr. Lester Agyei (Ahd-JAY-ee) McCorn is a visionary leader, scholar, author, activist and college president. He is the 13th President of Clinton College in Rock Hill, SC. He is a native of Worcester, Massachusetts. An alumnus of Morehouse College, Yale Divinity School and Chicago Theological Seminary, he holds the Doctor of Ministry (D.Min.) from United Theological Seminary. He is currently a candidate for the Doctor of Philosophy (Ph.D.) in Ethical and Creative Leadership, with a concentration in Martin Luther King Jr. Studies and Social Change, at Union Institute and University in Cincinnati, Ohio. For several years, he served as an adjunct professor/mentor of doctoral students at United Seminary. Dr. McCorn is the author of “Standing on Holy Common Ground: An Africentric Ministry Approach to Prophetic Community Engagement.” (MMGI Press, Chicago). He had a 31-year career as a pastor in the A.M.E. Zion Church, including serving in the major cities of Boston, Chicago, Atlanta and Baltimore. He came to Clinton College after having served as the Senior Pastor of the historic Pennsylvania Avenue A.M.E. Zion Church in Baltimore, Maryland from 2008 to 2017.

Dr. McCorn was appointed as the Acting President of the College in June of 2017. He was elected by the Board of Trustees in August of 2018 and inaugurated as the 13 th President on November 9, 2018. Clinton College is a private historically Black college (HBCU) founded in 1894 by the African Methodist Episcopal (A.M.E.) Zion Church. It is located in Rock Hill, South Carolina, just south of metropolitan Charlotte, North Carolina. Newly branded as “A Beacon for Leaders,” Clinton has experienced dramatic growth in student enrollment and has implemented new programs focused on student success, including a leadership/mentorship program called Everyday COACHES, the Department of Education Project Success program, which provides emergency assistance to students in financial crises, and a new Academic Success Center. Eleven of the students published a book of poems and essays chronicling their journey from trauma to college entitled, “Shattered Glass: A Generation Explains.” Dr. McCorn was chosen in December of 2017 to be a part of a delegation of HBCU presidents to premier universities in China in order to expand the HBCU-China exchange program. At the 2018 commencement ceremony President McCorn awarded the Rev. Dr. Bernice A. King, the daughter of Dr. Martin Luther King, Jr., an honorary Doctor of Divinity degree from Clinton College after she delivered the commencement address.

Dr. McCorn was recently chosen to be a part of the 2019 cohort of the Harvard University Seminar for New Presidents. The HBCU Campaign Fund named President McCorn as one of the “Ten Most Dominant HBCU Leaders of 2019.” As Clinton College prepares to celebrate its Quasquicentennial (125 th ) Anniversary, President McCorn will be leading an aggressive capital campaign to construct new start-of-the-art residence halls, academic buildings and an athletic complex to accommodate a growing student population and expanded campus. The College has adopted the mantra, “Excellence Without Excuse.” Clinton students, known as the Golden Bears, now proudly wear “The Clinton Blazer” for the weekly “Beacon Forum” campus assembly on Wednesdays and for other special occasions.

Dr. McCorn has received many awards and honors. He was a 2018 fellow of the Higher Education Leadership Foundation. He was also an inaugural fellow of the Rockefeller Foundation’s Next Generation Leadership Program (which included CNN host Van Jones and NAACP Legal Defense Fund President Sherrilyn Ifill) and Leadership Greater Chicago. He has served on the Boards of the United Way, Urban League and as chair of the Anti-Racism Task Force of the Illinois Conference of Churches. He is an inductee of the distinguished Martin Luther King Jr. Board of Preachers of Morehouse College. He is a proud member of Alpha Phi Alpha Fraternity, Inc., initiated at Morehouse College (Alpha Rho Chapter) in 1986 and was one of the featured “steppers” in the iconic Spike Lee movie “School Daze.”